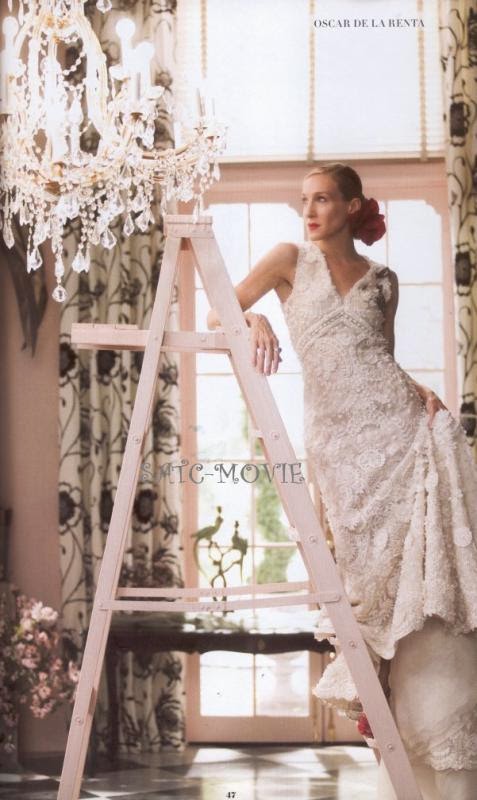 We know you recognize this screenshot from the first Sex and the City movie. Carrie Bradshaw wore various iconic dresses for her Vogue shoot, and this one was designed by Oscar de la Renta. This morning, we received news of his passing and it is devastating to say the absolute least.

While de la Renta was famous for designing items that were outside the wedding world (take a look at any red carpet event), we are going to miss his white gowns the most.

His most recent Spring 2015 collection was unveiled on the catwalk in NYC a few weeks ago. It contained one classic dress after the next and many with hints of the lace that we continue to see since Kate Middleton walked down the aisle. The simplicity of each gown was breathtaking and perfect for the bride looking for something not so over the top as many other designers showcased.

Of course, his most recent work was seen on Amal Clooney (aka George Clooney’s wife) at their wedding earlier this year in Italy. Amal, who had been quoted in interviews said that she wanted a gown that was “classic and romantic” and that Oscar was the first person she thought of. Her lace wedding dress worn on September 27, 2014 was graceful and stunning, just like all of de la Renta’s other designs.

This is a true moment of sadness in the fashion world. With many designers competing to bring their backless dresses to the forefront and blinged out necklines to brides across the world, none of de la Renta’s dresses were ever like that. He was a classic designer and his gowns were just that: classic. There was no “back down to here” and “slit up to there” and unlike many dresses that we see now, his wedding gowns looked like actual wedding gowns.

One word I would never use to describe de la Renta with? “Trendy”. And that’s a good thing. In a world of “I’ve seen that dress a hundred times before”, his creations stood out. You always knew his gowns when you saw them. Brides that are trying so hard to be different should look at his gowns for inspiration. When a woman put on her de la Renta wedding gown, you couldn’t help but say, “Now there’s a bride.”

He is going to be missed dearly.

Thank you Oscar. You made an impact on the fashion world, and the bridal fashion world that was more powerful than many designers ever dream of. Thank you for being true to your designs and for always putting together some of the classiest wedding gowns we would’ve never imagined ourselves.

Gay or Straight, you have the right to be married to your love!

Not all Planners are Created Equal

They can’t, they won’t, they never will…