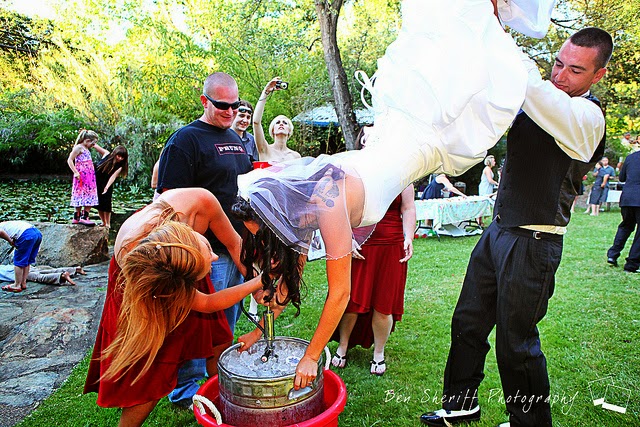 First of all, I did not think finding a picture of a bride doing a keg stand at her wedding would be that easy to find. Google it. There are literally hundreds of images. If you think this is OK then stop reading.

This week, CNN put out an article basically stating that an extravagant and expensive wedding means that your wedding is doomed for failure. A direct quote from their article: “Specifically, the study found that women whose wedding cost more than $20,000 divorced at a rate roughly 1.6 times higher than women whose wedding cost between $5,000 and $10,000. And couples who spent $1,000 or less on their big day had a lower than average rate of divorce.”

The national average hovers around $28K for 2014, but in the Northeast (NJ, NY, PA, CT) it’s closer to $45-$50K. Why? Because that’s what it costs to get married in this area. California is pretty much the same, Chicago gets pricey, Southern Florida is up there, and so are a few other areas of the country.

Here’s some basic math and facts for you (and CNN): A per person cost on a Saturday night with an open bar can be anywhere from $75-$250 per person. The average guest count in the Northeast is 150 people. $75 times 150 is $11,250. This is on the lower end and only factors in the cost of the food and alcohol. Truthfully, most venues will start you out above $100 per person and toss in service and gratuity (that’s anywhere from 6-9% and 20-27%). You could easily be looking at a $20k bill before you pick anything outside of your venue and catering.

CNN goes on to say that it’s the wedding industry that is manipulating couples into believing that the more they spend on a wedding, the more successful their marriage will be. I don’t know of a single wedding professional that believes that or says it. There is no correlation between how much you spend on a wedding and how long you will stay together. There just isn’t.

There is also no relationship of the statistics in CNN’s article. Couples that spent $1,000 or less had a lower than average rate of divorce? That is merely a coincidence. One thing has nothing to do with the other. Furthermore, where is the statistic about the rate of divorce in 2013? Nowhere to be found. But we found it and you can read the entire article (get coffee) right here: http://www.divorcesource.com/ds/main/u-s-divorce-rates-and-statistics-1037.shtml

Divorce Source states that, “A young couple marrying for the first time today has a lifetime divorce risk of 40 percent, ‘unless current trends change significantly.'” It also debunks the whole myth about 50 percent of marriages ending in divorce, which was never true in the first place.

“The divorce rate ranged from a low of 14.3 in North Dakota to a high of 34.5 in Washington, D.C., for a national average of 19.4, according to National Center for Family and Marriage Research.”

Where is the math? Nowhere. All CNN wants to tell you is “don’t let those evil wedding people tell you to spend more money because it will not guarantee you a lasting marriage.”

Well, duh. Of course it won’t! We don’t know if your marriage will last! I’m not JLo and this isn’t “The Wedding Planner” movie. What we do know is what things cost, and as a planner, we are going to work with you and your budget, but we are also going to be realistic. Would I love to see flowers on the ceiling at every wedding I plan? Sure! But that’s because I like suspended flowers, not because I think it will bring the couple luck and they will be married forever.

CNN puts the nail in the coffin with their closing quote:

“Planning a wedding? In addition to slashing costs, you might want to invite those extra co-workers and far-flung cousins, too. The Emory study also found that the greater the number of people who attend a wedding, the lower the rate of divorce.”

How is that possible? The more people you invite, the more you spend (per person costs, hello???) and the closer you get to that marriage of doom aka over $10,000 mark!

This is the dumbest article I have ever read: http://www.cnn.com/2014/10/13/living/wedding-expenses-study/index.html