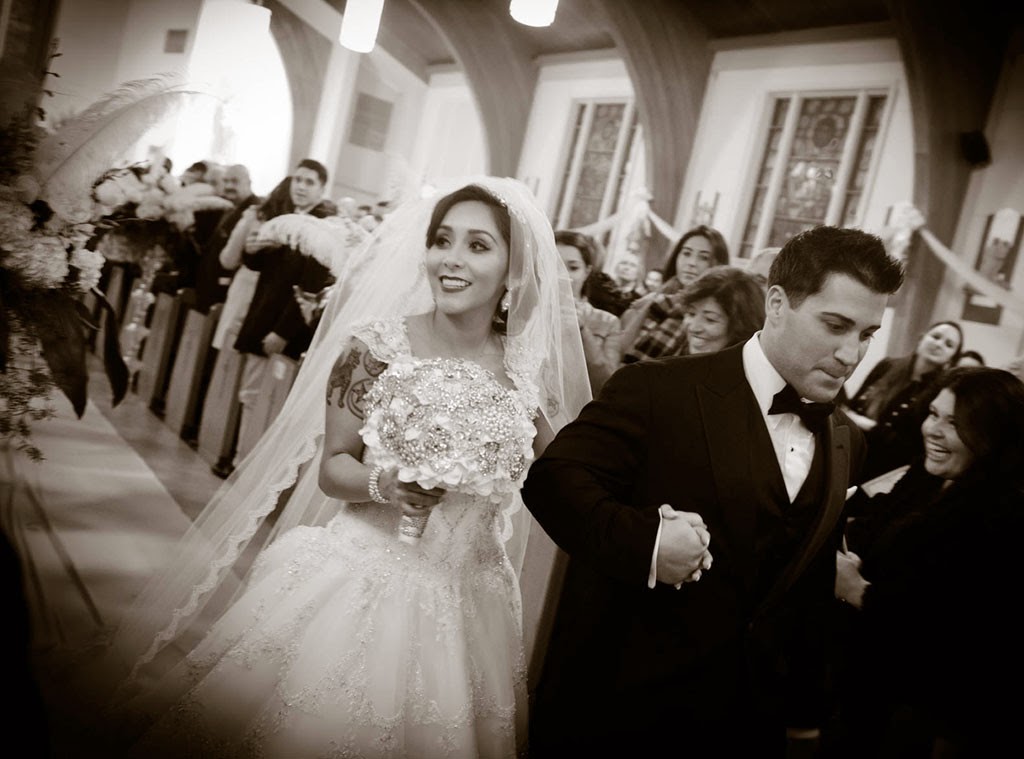 It’s official, Snooki is married. In a traditional church ceremony (we called it) and a formal non-cheetah print reception (we called that too!). Nicole and Jionni were married this past Saturday. I must have hit the “refresh” button 100 times on Sunday morning until pictures finally were posted. Much to my dismay, the only pictures anywhere to be seen were just wardrobe related. While I’m dying to see how this Gatsby-themed party actually looked, I am certainly happy to throw my two cents in about everything else.

First and foremost, can we all take a minute to applaud Nicole for not only selecting two outstanding and classy wedding designers (Eve of Milady and Ines di Santo) for her gowns, but for also putting her bridesmaids in form-fitting black dresses? A class act all of the way! I also want to say a huge “I told you so” to every planner, florist, “expert” and so forth – that had her going all “Jersey” for her style. Major kudos for not putting her bridesmaids in leopard anything. Winner.

Many brides cannot afford two gowns but we have plenty that wish they could. Clearly, Nicole wanted a gown to get married in, and a gown to party in. If you have been living under a rock, you probably didn’t know that Nicole is no longer a meatball but a thin, fit and healthy woman with an outstanding body. What woman wouldn’t want to show that off?

This is why we’re confused that both of the dresses didn’t accentuate her body.  In fact, they covered it all up. Don’t get me wrong: conservative dresses are totally OK by me, but they need to fit you. The first picture I saw was Nicole in her ceremony gown and while the details were beautiful, I just shrugged my shoulders and said (outloud) “this is it?” This was what I was waiting for? It’s fine and all, but it was underwhelming. The straps needed to be tighter and the waist of the gown should’ve been brought in at least another inch. This dress needed an alteration the week of the wedding and if it was altered, it wasn’t done well.

Then I saw that she had a second gown and it was designed by Ines di Santo. If you follow me on Twitter or Facebook, you already know that Ines di Santo is my favorite designer and I declared her the winner of Bridal Fashion Week, Spring 2015. That said, I had high hopes that Snooki’s reception gown was going to stop traffic.

I was wrong.
I was so bored with this gown on her and I was really hoping that she pulled a Kim K and had a third gown lined up. The di Santo gown was in a whole different league than the ceremony gown was, but it wasn’t the right gown for her AND it didn’t fit. It swallowed up her tiny body and it wasn’t really the party dress she described it as. Reportedly, it had a removable skirt, but there are no pictures yet to back that up. That skirt, by the way, was a drop waist and it really needed to either be pulled up or dropped altogether. I would’ve put her in to something more fitted, flattering and less poufy for the reception. Ines di Santo doesn’t make bad gowns, this gown was just bad for her. Between the silk taffetta and the pleated skirt, this dress is not made for petite women.
Here is the gown on the runway: 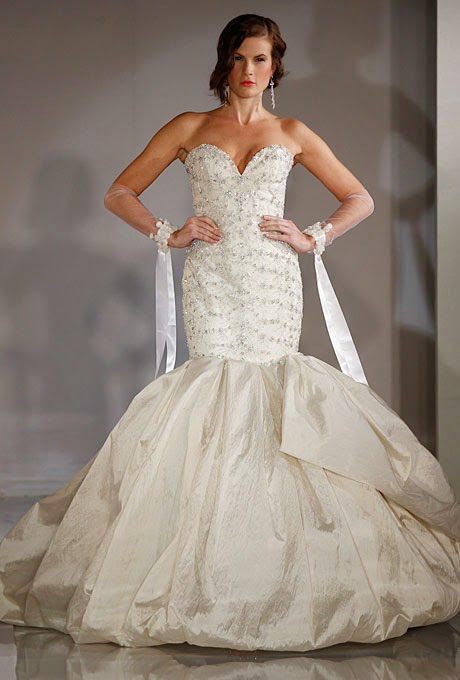 The dresses were bought from the same store, and were probably altered by the same person. The bust of the reception gown was not fitted enough and you can see the gap between her skin and the dress. This is a common problem with strapless gowns and the only way to fix this is to get it altered as close to the wedding day as possible. Many brides will lose anywhere from 2-5 pounds the week of the wedding, so last minute alterations have to be done!

Her bridesmaid dresses were on point though! Black, form-fitting mermaid gowns were not only perfect for her theme, but classic and elegant. With such a huge wedding party, Nicole was smart to put her ladies in something simple so that it wasn’t a hot mess of fabrics and patterns.

What else do we know? She hired a band (I LOVE that), held her reception at The Venetian in Garfield, NJ (love that too), and used a bouquet of bling (love love love) instead of traditional flowers. She also had an After Party with unhealthy fried food which is a huge trend that everyone should be doing. What we don’t know is what the decor and centerpieces looked like, if she had an entrance and what the rest of the details were. This just means that this is just part one of our blog about Snooki’s wedding.

Looking forward to seeing more pictures and absolutely can not wait to see the entire day unfold on the last season of ‘Snooki and JWoww’.

What did you think of the dresses? Were you expecting something else? Tell us your thoughts in the comments section!

Casual Bride on a Budget? J. Crew to the Rescue!

A toast to a new trend!

How to serve your drinks…like never before

How to Have an Incredible Garden Wedding