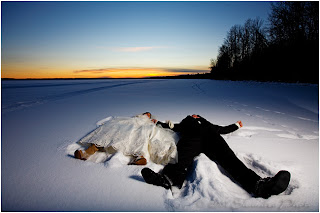 “All I can say is thank God snow is white- it works. Know what I mean?” – Father of the Bride-

Recently in New Jersey (and parts of Pennsylvania, NY and up into New England) there was a random snowstorm that dumped over a foot of snow in some places. This storm spanned a Saturday and a Sunday knocking down trees, making travel hazardous and having residents forget all about the Hurricane Irene disaster back in August.

The worst thing about this storm was the unpredictability of it. There was no clear forecast about the amount or the timing of the snow…just that it would be a bad weekend to be outdoors.

But it was only October, and that’s becoming one of the most popular times to get married in the Northeast. Between the cooler, but not too cool temperatures, the fall foliage, and the general spirit of the season, September through November is seeing an increase in weddings. Plus, it’s not like anyone has to worry about a snowstorm. Well, except for this year.

So what do you do when it snows on your big day? Many couples plan for rain and set up a second location if their original one is outdoors. After all, no one wants to get all muddy and wet in their pretty white dress. However, there aren’t a lot of plans set up just in case it snows during your outdoor ceremony. Why not? Because who plans an outdoor ceremony during the winter months? Very few, I promise.

This is just another reason to hire a planner who can take your day and keep it special despite Mother Nature’s desires. Sometimes vendors will cancel or not show up and that’s something to be prepared for. When working with vendors, it’s really important to look over the contracts with a fine tooth comb, and to ask the question: if a disaster (an October blizzard is a disaster) strikes, what guarantee do I have that you’ll be there? It’s also important to find out how venues operate under those circumstances. What if they lose power? What’s the backup plan? Don’t ever feel silly asking these questions because if 2011 has taught us anything, it’s to be prepared.

In “Father of the Bride” the wedding planners took care of everything from blowdrying the now frozen tulips, to keeping the swans in a warm bath inside. They are there to make sure you don’t freak out. They take care of the problems, and you’ll be happy to you made the decision to have one should anything go wrong.

Thankfully, snow is white and it will go with everything, including your dress. Think of how extra special the pictures will now look. Talk to your venue about maybe changing your signature drink to something frosty. Throw snow or white glitter instead of those rose petals or rice you originally planned. Maybe even have your DJ play “Winter Wonderland” for your big entrance.

There are so many ways to incorporate snow into your wedding, even if it wasn’t on the invite list!

Honeymoon with the animals